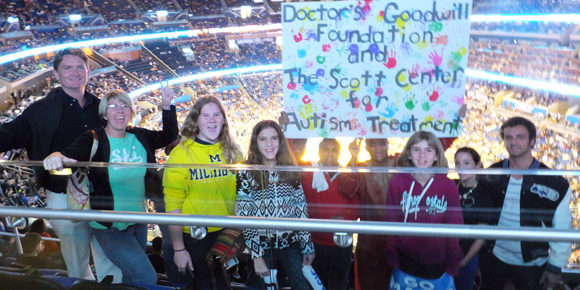 The Doctors Goodwill Foundation is a coalition of doctors, nurses, pharmacists, allied health professionals, hospitals, healthcare agencies and area businesses who have joined together to improve the healthcare system. “Thanks to Colleen Middlebrooks at the Scott Center and Joe Robinson in Titusville, we have been able to bring these children to see some Magic,” said Bhalani, as he watched the game with his new young friends.

“Thanks to our caring and generous sponsors we were able to provide this fun outing for these children to come and see some professional basketball.”

Even though the Magic succumbed to the superior Mavericks on the court, there was plenty of magic in the stands, as the kids cheered and whooped it up during the occasion.

“This has been a great night for the kids and for all of us”, said Dr. Ashish Udeshi, President of the Doctors Goodwill Foundation, who was one of eight DGF volunteers who also made the trip.

“Volunteering with the Doctors Goodwill Foundation is personally very rewarding and its great fun to be out here with the kids.”

The Magic versus Mavericks game had an estimated 5,000 additional fans than usual, as it was “India Day,” sponsored by the Indian American Chamber of Commerce. “Thank you for the generous donation from your foundation of 20 seats to the Amway Arena to attend an Orlando Magic game,”  Brevard Charities Sharing Center Executive Director Joe Robinson wrote in a thank-you letter.

“The excitement of enjoyment was seen in children’s faces. North Brevard Charities Sharing Center, Inc. looks forward to future endeavors with your Foundation.”

International recording artist Jay Shawn performed after the game to the delight of the excited music fans.

“This has been awesome,” said Casey Biddle,” from Melbourne. “Thank you so much to the Doctors Goodwill Foundation.”

Find my RSVP for Event Name

We have email-ed you a confirmation to

Change my RSVP
{"codes":{"err":"Required fields missing","err2":"Invalid email address","err3":"Please select RSVP option","err4":"Could not update RSVP, please contact us.","err5":"Could not find RSVP, please try again.","err6":"Invalid Validation code.","err7":"Could not create a RSVP please try later.","err8":"You can only RSVP once for this event.","succ":"Thank you for submitting your rsvp","succ_n":"Sorry to hear you are not going to make it to our event.","succ_m":"Thank you for updating your rsvp","succ_c":"Great! we found your RSVP!"}}
X